“I liked that drill. It wasn’t complicated like the other ones.”

I forget the exact drill, or whether this actually referred to something taught by another instructor covering one of my classes, but these words were uttered by a student who had come to train with me after gaining a few black belt levels over a decade or more of training with another association.

This student struggled with a particular aspect of my training. He could cope with attack, parry/slip and strike. He had learned to cope with escaping clinches. He knew how to evade a tackle. In fact like many karateka who had learned one step attacks he could cope with my one step responses, even though I was asking him to work against different attacks at a different range.

The problem was failure, quite literally. My ‘complicated’ drills were/are simple predominantly gross motor and adrenaline tolerant responses to particular attacks or positions. Individually the student could do them. When I introduced the idea of moving from one drill he could do to another he could also do (because a punch became a clinch because the response ‘failed’), often the student froze and ‘failed’. The complicated element was that I was envisioning the possibility of failure, so a partner could move from one thing to another, so several drills could end up flowing together (and not necessarily in a fixed manner).

The fault was not with the uke for challenging him by pretending something had failed (as opposed to standing still, or pretending something had succeeded and dropping), thus moving to try and regain the initiative (which is a desirable attribute). The fault was not with the drills: they worked in the context for which they were used. Nor was the fault with the student. In my opinion the fault lay with the foundations on which the majority of the student’s prior training had been built: it failed him because it hadn’t trained him to be able to move or adapt to constant pressure.

In a lot of karate it is common to see students learn to deliver single techniques, then subsequently learn to deliver combinations. In a lot of ‘free sparring’ when something doesn’t work, an exit or retreat is made, and then the same or different combination is tried again. Similarly if a counter attack is made then a person often covers and/or retreats and looks/waits for an opportunity to respond, usually if the attack has exhausted itself. There is an element of turn taking. There is a rhythm of sorts and there are pauses.

This isn’t the case in all arts. Watch a BJJ class, a Judo newaza class, or a wrestling class, and it’s normal to see a students spend a large proportion of time not simply practicing isolated drills but actively working with and against each other, both constantly transitioning to gain and maintain dominance. This can be the case with karate training. I believe it should make up a significant proportion of karate training. 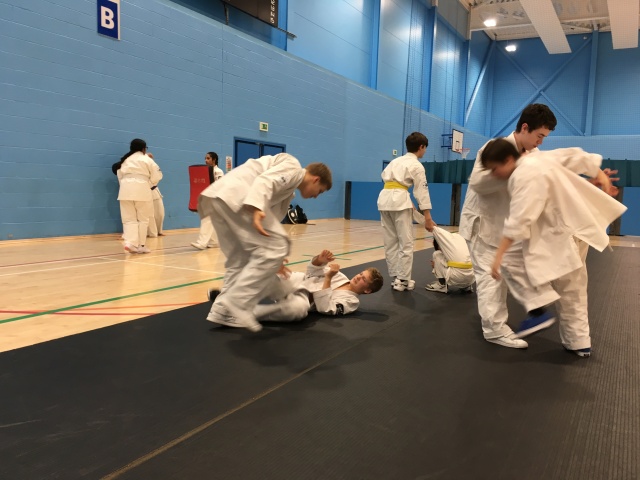 While there are some who choose to practice karate as almost exclusively a striking art, it is a generic term to describe a mixed martial art of striking and grappling made up of many different influences. It is both hard and soft, has grappling and striking, and is comprised of multi-range approaches. You grapple to gain an opportunity to strike and strike to gain the means to grapple, choosing and moving between tactics as necessary.

I don’t advocate complicated drills. I particularly don’t advocate long fixed sequences or unchanging continuous loops. The longest ‘set’ drill sequence I build, which intends to be successful on the first move (two chest strikes followed by a head strike, a spinning strike and a headlock), is actually specifically designed so that it can be broken up by either training partner in multiple ways at three different points, moments where the practitioners can do something different to force adaptation and movement into alternative approaches. It’s actually not fixed at all.

Keep it simple, but never forget even simple stuff can fail. Have a simple redundancy for that failure, and for every feasible position. That doesn’t require lots of kata, or lots of techniques, but rather an in depth understanding of a small number. Make sure these simple moves can fit and move together in multiple ways like Meccano, then work continuously against resistance, flowing from move to move.

← How do you maximise your ability?
Brains saves both →